PNC: Building the Greenest Office Tower in the World

PNC has displayed a tremendous commitment to green building standards and sustainable practices throughout its business. Virtual Wallet, The Tower at PNC Plaza, and recycling initiatives were all created to promote a green and sustainable future.

Now, The Tower at PNC Plaza presents the greenest office tower in the world that exceeds the current criteria for a LEED Platinum certified building. We learned more about this amazing sustainable building and it’s technology from Kevin Wade, director of Corporate Real Estate at PNC.

Why build The Tower at PNC Plaza in Pittsburgh?

We have been headquartered in Pittsburgh for 164 years and have invested significant resources to strengthen the community. As for our decision to build in the city, we always have believed that an investment in the core of an urban center is essential to the well-being of any region and have built our business, leadership and philanthropy around this philosophy. 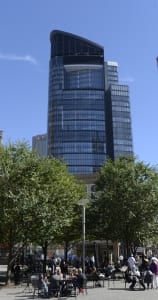 How long did it take to design The Tower at PNC Plaza?/What were some challenges building the greenest office tower in the world?

We began designing The Tower in November 2010 and continued to modify the design throughout the construction process. For example, The Tower at PNC Plaza mockup, a 1,200 square foot version of the building that was constructed for testing purposes, allowed us to identify and address design and technological issues before implementing various design elements and technology in our headquarters.

What was it like incorporating state-of-the-art green technology, such as the solar chimney and double-skin facade, into the build?

It was challenging but exciting. While these technologies are not new in and of themselves, we are the first company to implement all of these technologies in one building. Similar to our approach for all PNC buildings, however, we tested and verified technology before implementing it in The Tower. Our approach to testing The Tower’s technology and design elements in the mockup helped us stay on schedule and save money by giving us the opportunity to address issues on a small scale, rather than in the actual building.

How else does The Tower at PNC Plaza promote sustainable innovation for new development in the city? 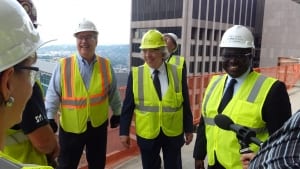 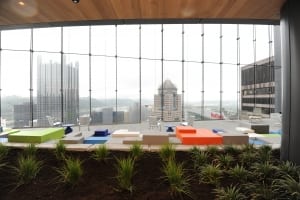 What is your favorite feature of the building?

A favorite feature among many employees is the Indoor Park, which is located on the 28th floor and available to all employees. Thanks to the availability of WiFi throughout The Tower, the Indoor Park, which offers breathtaking views of downtown Pittsburgh, often serves as an alternative work and meeting space.  To create the look and feel of an actual park, PNC planted trees, among many other plants, and conditions the Indoor Park so that its temperature is similar to that outside.

See photos of the build and a virtual tower of The Tower at PNC Plaza here.