A strong marriage can be slightly strained by the obsessive-compulsive gardener, as most of us know. Just ask Steven Biggs of Toronto, Canada.

“I’m still married,” he says laughing, “even though I had 50 to 100 brugmansia plants. Then the figs took off, and I had figs growing everywhere.”

The author of Growing Figs in Cold Climates: 150 Of Your Questions Answered, (his second book on the topic) compiles the best inquiries he received after publishing Grow Figs Where You Think You Can’t.

“I’ve taken all the questions that I got since I wrote my first book and weaved them together,” Biggs says. “I think what’s great is you’ve got all these different voices in different situations. You get a sense of how people are creative, trying to fit figs into different scenarios.”

His history with figs goes back to childhood when a Maltese neighbor grew a fig tree using a small greenhouse to keep it happy during the winter.

“I find that it’s people with some kind of Mediterranean thread in their family histories who are growing figs,” says Biggs.

His history continues at university when his next-door neighbors of the rooming house he stayed buried a fig tree, at the end of the growing season. Then a job in the United Kingdom at a nursery, which had the British National Collection of Citrus and Figs, solidified his passion.

“That kick-started my interest and awareness of figs as a possibility even in cooler climates," he says of time spent in the UK.

Biggs had some figs but wasn’t very successful until he met Adriano, a fig expert in Toronto.

“He took me under his wing and told me all his tips, and that really got me excited about figs,” Biggs says of his mentor.

The hardest part of growing figs he says is getting it through winter and getting fruit the next season.

“It depends on how creative you are,” he says of overwintering.

Biggs has heard from fig fanatics from all around the world who have been successful in climates much colder than Toronto (zone 5) or Western Pennsylvania (zone 5/6). For one grower, it was burying the tree next to the house where a little heat from the foundation helped it survive in zone 3. Another gardener living in an apartment used a cooler for his plants to keep them safe. Yet another uses 3-millimeter thick clear plastic on his tree to extend the harvest.

But in a northern climate, “It’s not as hard as people think,” Biggs remarks. “That’s why it’s such a fun niche crop.”

Biggs has 20-25 fig plants, some in containers and others out in the garden.

“I was up to 50 varieties, but my family put me on a really strict fig diet,” he said with a laugh. “Meaning get rid of some plants because we can’t put anything else in the garage and they are taking over the yard.”

He has a technique for outdoor trees that anyone could learn from.

“I loosen the soil on one side of the plant and tip them over and cover them with straw bales," he says. "That’s just like a blanket over top and they survive that way.”

A cement block on top of a piece of plywood keeps the tree flat during the application of straw.

Biggs waits until November to get the job done, and that’s the same time he’ll take any container plants he wants to go dormant into the garage.

“There’s no rush to get them in, he says, they can take freezing temperatures.”

The garage is insulated and has a baseboard heater, which is only used for extreme cold. Biggs uses about 23 degrees Fahrenheit as the lowest temperature, causing plants to die back to the roots, and that’s when the heater is turned on.

“If you’re going to go to all that trouble to grow a fig, don’t go below a safe temperature. Aim for that as a minimum,” he adds. 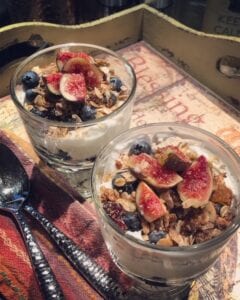 When Rose Romboski’s Instagram feed included a granola dish that included her own figs, I asked the Cranberry Township resident how she grew her tree.

Her history with figs is connected with her Italian heritage.

“Growing up, the old Italian guys in the neighborhood, (they) always had figs planted in the ground. I thought, wouldn’t it be great to have a fig tree one day.”

She had seen the burying method and didn’t want to deal with that. “All the research I did said you could grow them in containers.”

It took three years for the plant to put on fruit, but some years she’s picked as many as 50 fruits from her tree, which is named Fiona.

“She got a name because my husband doesn’t like it when I bring too many things in the garage," she says. "It cramps his style. I can bring no more than five plants in. I need a greenhouse,” she said trailing off.

Like Biggs she waits until November, right before Thanksgiving, to bring the container inside on a dolly.

“Our garage has windows, says Romboski, so there’s a lot of natural light in there.” The space is also heated, kept at 55 degrees so her husband can care for his vehicles. The plant will drop its leaves and go dormant, getting lightly watered about once a month.

In March when the plant starts leafing out, she’ll begin to water and fertilize the fig tree.

After removing some annuals, she uses on the edge of the container, she’ll also take a few inches of planting mix off and add the compost.

“Just kind of work it into the soil,” she adds.

Romboski also performs the “dance of the figs” in the spring, sometimes rolling the plant back into the garage when frost looms.

She says of her husband, “he didn’t think he liked figs.” That changed at breakfast the other day when he tasted the fig topped granola.

Besides the sweet treat of the summer fruit, Romboski gets a lot out of her time with Fiona. “Cultivating it, watching it grow," she says. "It’s fun and very satisfying.”

The million-dollar question is when to bring the pots back outside and uncover the outdoor trees, he says. “You always want to get a good early start, so you’ll be able to harvest."

One interesting thing about those indoor figs is they can put on an early crop of fruit formed on last year’s wood, it’s called the breba crop.

“Sometimes those little figs will start to swell and grow even before you have leaves,” says Biggs. “If you get a frost and those little things are growing, that could wipe them out.”

He watches the weather carefully, especially the long-range forecast, deciding when to bring out his potted figs, but it’s not an exact science.

“I call it the dance of the figs," he says laughing. "We get a cold weather warning and it's back into the garage. Gets nice? Move them back out. My neighbors probably think I’m crazy.”

He admits to making mistakes when uncovering his prostrate, outdoor trees and has learned to gradually acclimate the fig to spring weather.

“What I’ll do is I take it off mostly," he says of the straw. "But I’ll leave a thin skiff of straw on there. I never stand up the tree under straw right away. Once I know I’m in the clear I’ll stand them up."

'In the clear' means no more frost, so usually around mid-May for his climate and about the same for the northeast.

Plants are best suited for full sun during the growing season, but he says if the garden is only sunny for half of the day, give it a try.

Another trick is to put the plant near radiated heat. A brick wall would be perfect.

When asked why would someone go to all this trouble to grow a plant not meant for a cold climate, Biggs starts laughing.

“When you’ve had a fresh fig, there’s no comparison to the dry store-bought figs,” he says. “The fresh figs that you might find at the grocery store, still don’t compare to the garden-grown ones because it’s a fruit that stops ripening when you pick it. In the garden, you can let it get perfectly ripe. There’s a bit of a mystique to it,” he adds.

His wife and three children might have put him on a fig diet, but they all love ripe figs. The house rules basically say, 'first come, first serve.'

“Yesterday I was excited, eyeing up some that were ripening,” Biggs says. “I went out and they were all gone. It was either the squirrels or the kids.” His son fessed up to enjoying the harvest, which was fine with Biggs.

Some of his favorite varieties for northern growers include ‘Chicago Hardy’ for its ability to handle the cold and ‘Desert King’ as the best for the early breba crop. ‘Celeste’ or ‘Improved Celeste’ are also recommended for hardiness and an early harvest.

For those headed down the fig rabbit hole, Biggs points gardeners to the website ourfigs.com. Growers trade cutting, share information and talk figs.

Biggs offers sage advice for those who dream of harvesting figs next summer. “Be creative and find a fig growing and overwintering method that suits you and your garden," he says. "There’s no one right way.”

For more fig and gardening information or to purchase Biggs’ books go to Stevenbiggs.ca.

Doug Oster writes a weekly column for The Green Voice Weekly Newsletter. He also the host of The Organic Gardener Radio Show every Sunday morning at 7 a.m. on KDKA radio 1020AM.